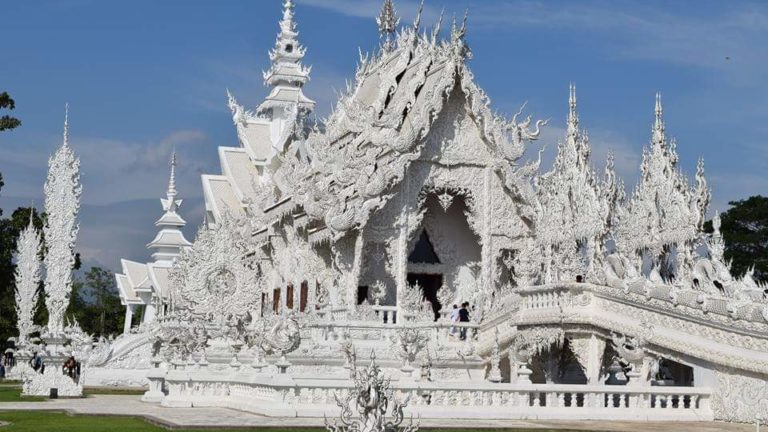 My friend and I set on a trip to the northern Thailand during the year end Christmas and New Year year holiday. From Penang, we sat the KTM komuter from Butterworth Station to Padang Besar and continued on the trip from Padang Besar to Hatyai Junction by SRT train. From Hatyai town near the Kim Yong Market at Petchkasem Road right before the turn to the overhead bridge, we sat the red songthaew to the Hatyai airport for only 30baht per pax. The songthaew will clearly mentioned AIRPORT or in Thai. From Hatyai, we boarded AirAsia flight to Chiangmai.

Once reached Chiangmai airport, we headed to the Chiangmai old town and checked into our guesthouse. We had our dinner at the road side stalls just opposite the Chang Phuak gate. The next morning, we boarded a mini van (Aya Service) from the Arcade Bus Station to a small town of Pai northern of Chiangmai. The journey took us about 3.5hours passing through about 762 steep curves over 137km. Upon reaching the small Pai town, we rented a motorbike each for only 300Baht a day. We also signed up for a one day trip on the next day to the town of Mae Hong Son. From the Aya Service bike rental shop, We rode our scooter to our guesthouse and settled down. As Pai is located on a higher altitude, the temperature was cooler compared to Chiangmai. After that, without much rest, we set out on a bike tour around Pai town. We visited many interesting places, namely the Chedi Phra That Mae Yen, Pai Canyon, Pai Memorial bridge, Love Strawberry Pai, Big Tree swing, The Upside down house, Pai village farm, Coffee in Love, Pai treehouse, Yellow flower field and few other attractions along the way. As night approaches, the temperature dip lower to about 12 degree C. We headed to the night market and grabbed some food for our dinner.

The next morning, we woke up about 4am early in the morning as the van for our Mae Hong Son day trip will be picking us up early. The journey from Pai to Mae Hong Son was rather scary as the van had to go through many steep curves along a very narrow road. As it was very dark, the only light was from the van’s headlamp. The driver was rather sleepy and at one point nearly hit the cliff at the side of the road. Our first place of attraction for the trip was the Pang Oung reservoir. There was pine and fir trees growing around the reservoir and swans happily wading in the water. Next, we visited the Bamboo Bridge, Wat Phra That Doi Kong Mu, Phu Klon Hot spring and mud spa before stopping over at Baan Rak Thai Yunnan village for lunch. The scenery at Baan Rak Thai was magnificient as if we were at Yunnan China. There was a tea plantation at the cliff and a big clear lake. After lunch, we visited the Karen village and while on the way back to Pai, we stopped over at Kiew Lom viewpoint for viewing sunset.

On our third and last day at Pai, we woke up very early in the morning and headed to Yun Lai viewpoint to catch the sunrise. It was a chilly early morning ride as the temperature was about 10degC. The sunrise view at the viewpoint was magnificient. After that, we visited Santichon village before checking out and headed back to Chiangmai.

Upon reaching Chiangmai, we quickly bought a bus ticket to Lampang, another small city at north Thailand. We reached Lampang quite late in the evening. From Lampang bus station, we took a cab to our guesthouse. After that, we quickly went out to explore the city. Lampang was special as they have horse carriages plying every road in the city. We walked to the famous landmark of the city Ratsadaphisek bridge and then to the night market. We had a tasty Thai laksa (khnom Jeen) for dinner.

The next day we boarded bus from Lampang direct to Chiangrai. Once reached Chiangrai, we boarded a local bus up north to Mae Sai. We stopped before the junction to Mae Salong near Mae Chan market. From there, we waited for a few more people who wanted to go up to Mae Salong by songthaew. The songthaew brought us all the way up to the small village of Mae Salong. After checking in to our guesthouse, we explored the area and had a delicious tasty bowl of Yunnan noodles with dumplings. We had an enjoyable evening watching dance and cultural performances in conjunction with the 20th Miracle Tea, Sakura Blossom and Several Tribe Culture Festival. As the night got darker, we headed to a nearby stall to have a heart warming steamboat on a cool chilly night.

The next morning, we were woken up by the noises from the morning market just outside of our guesthouse. There were lots of fresh produces sold at the wet market. After breakfast, we hiked up to Doi Mae Salong hill till we reached the Wat Santhikhiri temple, Phra Borom That Chedi and General Duan tomb. Along the way, we managed to see sakura flowers started to bloom on the trees. As it was about noon, we checked out from our guesthouse, had the delicious Yunnan noodles again for lunch, bought some Mae Salong tea and headed back down the mountain to a small town by songthaew before continuing our journey by bus to Chiangrai.

When we reached Chiangrai, we quickly checked into our guesthouse and then without a rest got back on the road to explore the city area. We went to visit the Hill Tribe museum just before our dinner at the Cabbages & Condoms Restaurant. After dinner, we had a stroll at the 75th anniversary Flag and Lamp park. We are lucky as it was the first day of the Chiangrai Musical and Flower festival. We were impressed by the large scale floral exhibitions and landscaping at the park. There were many species of temperate climate flowering plants put on display such as tulips, roses, orchids, lavender, hydrangeas, lilies, cyclamen and more. We took so much photos in the park. There was also musical performances as well as food stalls selling various food and snacks.

The next day at Chiangrai, we had our breakfast and then proceed to the bus station to take the local bus to Chaing Saen. We stopped at the Golden Triangle Park for a visit to the Opium museum, Wat Phra That Pukhao and the Golden Triangle Buddha. From the temple, we had a nice view of the rivers from three countries namely Thailand, Myanmar and Laos converging into the Mekong river. After that, we went to the Mae Sai border checkpoint and had a walk at the street market before heading back to Chiangrai by local bus. In the evening, we rented a motorbike at Chiangrai town for our usage on the following day. After dinner, we had a walk at Chiangrai town and visited the Chiangrai clock tower.

On our third day at Chiangrai, we rode on our rented motorcycle to the Chiangrai ASEAN flower festival located at Garden of Reeds, Rim Kok, which is almost similar to the Flower festival at the city. The huge garden was beautifully landscaped with flowers. There were also temperate climate flowers on displayed as well. After that, we rode to the Wat Rong Khun, The White temple and then to the Baan Dam Musuem. On our way back to the guesthouse, we passed by the King Mengrai monument.

On the fourth day at Chiangrai, after had our breakfast, we checked out and boarded a bus back to Chiangmai. Upon reaching Chiangmai, we checked in to our guesthouse and then went out exploring the historical old city of Chiangmai. There were numerous temples we visited namely the famous ones are Wat Phra Singh, Wat Chiang Man and Wat Chedi Luang Worawihan with each of them having a unique design and history. As it was weekend, we also got a chance to experience the weekend street market. As it was New Year’s eve, everyone was in festive mood to usher in the New Year. We was at Wat Phra Singh listening to Buddhist talks and joining the chanting session till midnight. It was a totally different experience for me as back in my country we couldn’t experience such an occasion. As the clock struck 12, there were fireworks all over and people start releasing the paper lantern. The night sky was beautifully decorated with thousands of orange lights from the flying lantern with fireworks at the background.

The next morning, we rode our rented motorcycle up to Doi Suthep-Pui passing through the Chiangmai zoo. It was a tough ride as the road was winding and steep. We visited Wat Phra That Doi Suthep, Bhubing Palace and the Hmong village at Doi Pui. The landscaped gardens at the Bhubing Palace was beautiful and we got to see many sakura in full bloom near the Hmong village and coffee plantation at Doi Pui. Along the way back to Chiangmai old city, we stopped by for a sumptuos buffet BBQ steamboat dinner.

Finally, our holiday has to come to an end. After breakfast, we checked out, returned our bike and headed to the airport to catch our flight back to Hatyai. From Hatyai, we boarded the train back to Penang.